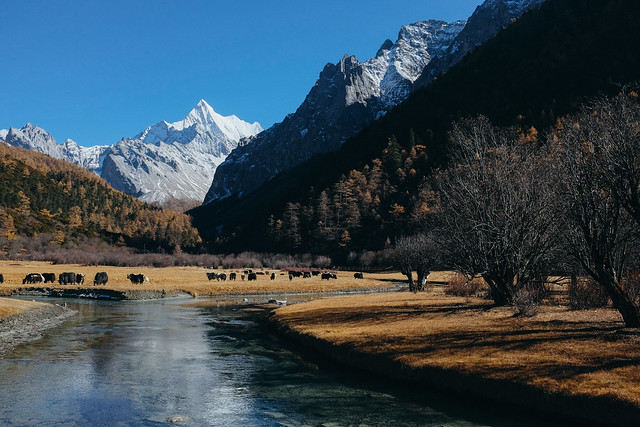 We finally got into Yading after giving ourselves some time to settle into the altitude of 3000+ meter at Daocheng. Yading has an average elevation of more than 4000m, and that is probably why it is regarded by the Chinese as paradise. 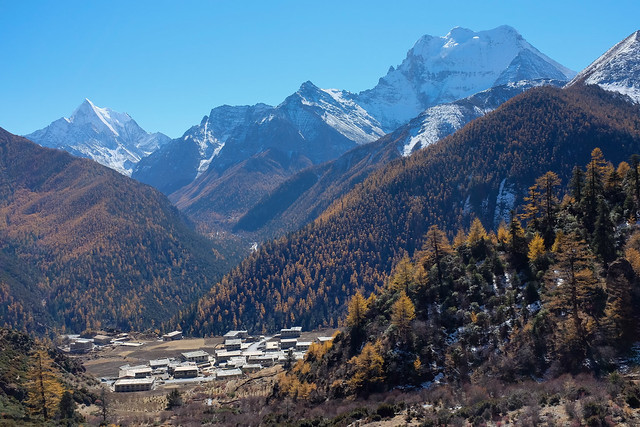 There was no other way to travel around in the Yading area, only the tourist bus was allowed, which was one of the effort by the government to limit pollution and overcrowding. After we checked into the homestay, we immediately went out to wait for the tourist bus and went to the main attraction in Yading which housed all the three sacred mountains. Once at Yading park, we were all in awe of what lied in front of us.

I didn't know how paradise should look like until I encounter this sight right next to Chonggu temple (贡嘎冲古寺). The turquoise river flowed between us and the farm where the Yaks grazed the yellow grass. Snow mountain in the not-so-far distance, trees that turned to yellow, the air that is basically zero pollution. 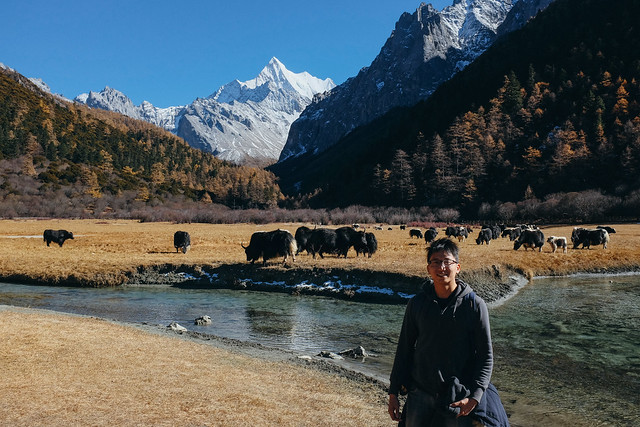 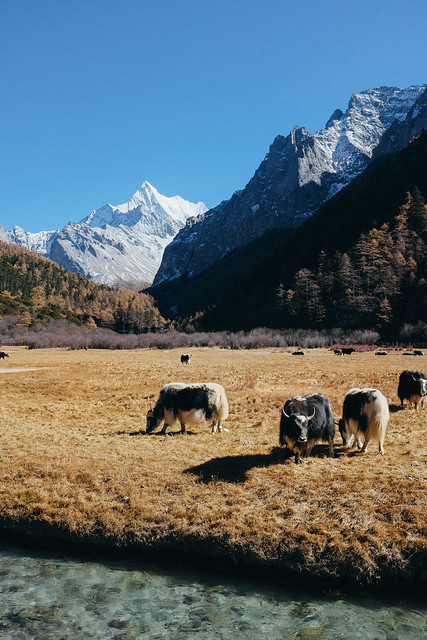 One hint here, the last bus to go back to the village is 5.30pm. We could not afford to spend too much time at the farm, otherwise we would miss out the scene we so dying to see. So we continued to hiked uphill, hoping to see the sacred 仙乃日 in her best light. 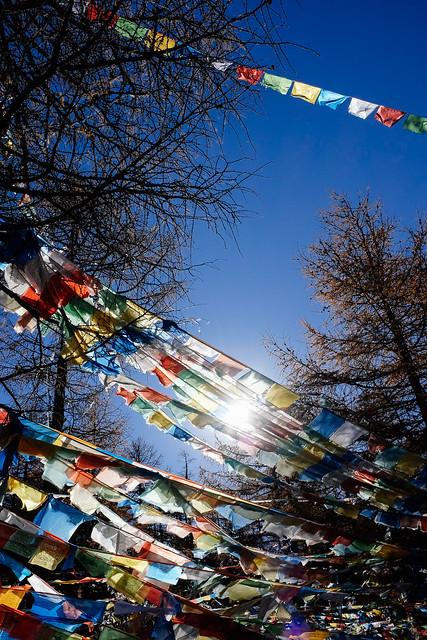 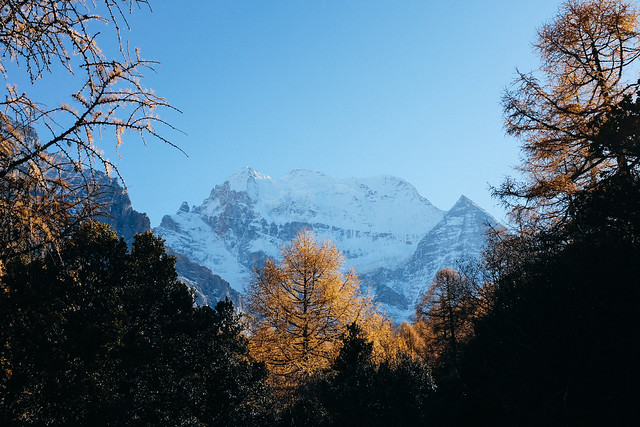 Gilbert had difficulty in high altitude, so has to take slower strides as the uphill climb was kind of strenuous. According to him, his heart was pumping so fast that he had to take a short break once a while. We could only encourage him to go further, while racing with time. We finally arrived at the 珍珠海 lake with 仙乃日 in the background. I wished I had a ultra wide angle lens here... Though I managed some shots while the lake was still before rushing back down hill to catch the last bus. 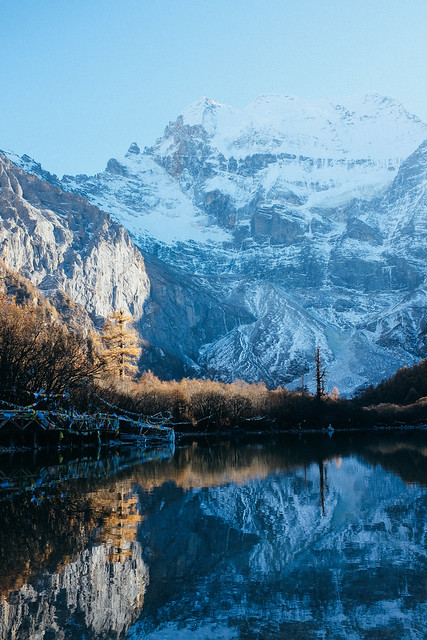 Before we left the park, the evening sun casted her magic on the Yak farm. 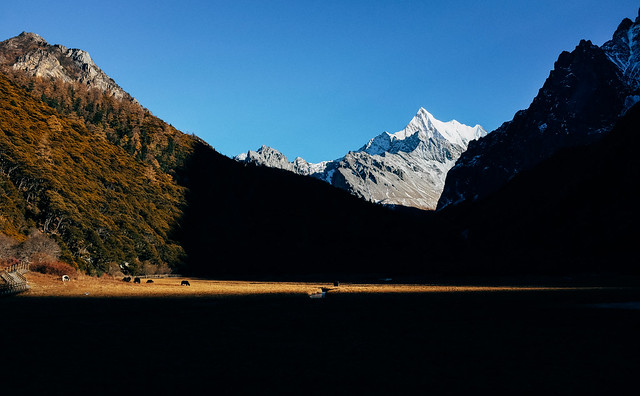 Since it was still bright outside, we wandered near our homestay while Gilbert went back to rest. We saw some mules also wandered around the village and we followed one of them into the house. That was when an old lady came out with food to feed her pet mule. The villagers here were so nice that she even invited us to stroke the mule. A guy, which I assume is the old lady's son, even invited us to go in and sit beside the fire to get ourselves warmer. It was quite awkward, as he did not seem to understand mandarin at all and we just sat there in silence while he smoked. After few minutes, we bid goodbye and thanked him for his hospitality and went back to the guest house. 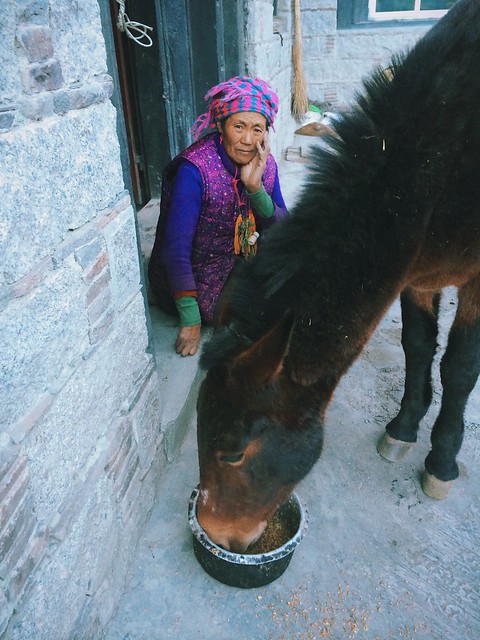 We met Chi-zhen, the boy from the family that managed our homestay and we chatted with him. This was when I asked if I could take a picture with him and his mother. 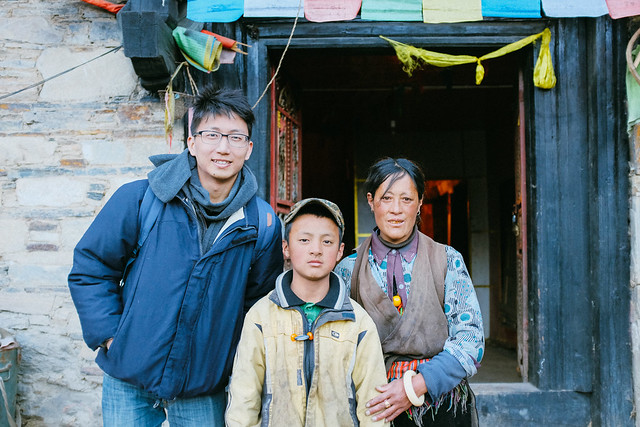 We later went upstairs and Chi-zhen came to chat with us about his school life, and a little bit about his life in the village, while the view outside the windows changed from golden to dusk. The boy was very mature at his age, he helped out in cooking our dinner with his father later and the dinner was great!! 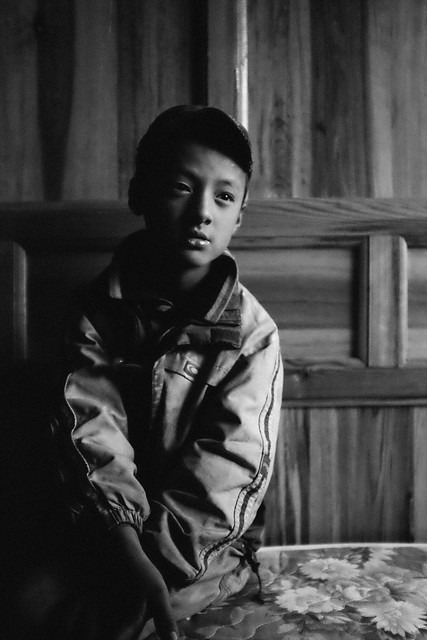 The day ended with filled stomach and anxiety for the next day. We asked the homestay owner to fetch us to the park in early morning and start hiking before everyone else!
Labels: China Shangrila travel
Location: Daocheng, Garze, Sichuan, China