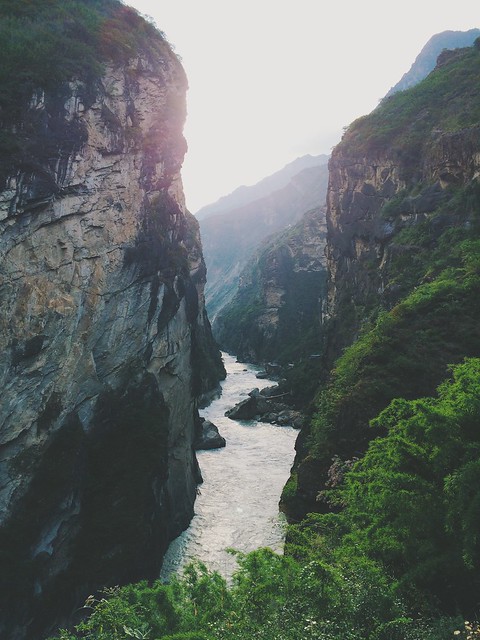 Tiger Leaping Gorge, a wonder of Mother Earth. It was told in legend that at one point of the gorge, it was so narrow that a tiger was spotted leaping over to the other side of the gorge, hence the name.

Jinsha river flows in the gorge, fast and furious. It is easy to understand that falling into the river means death. 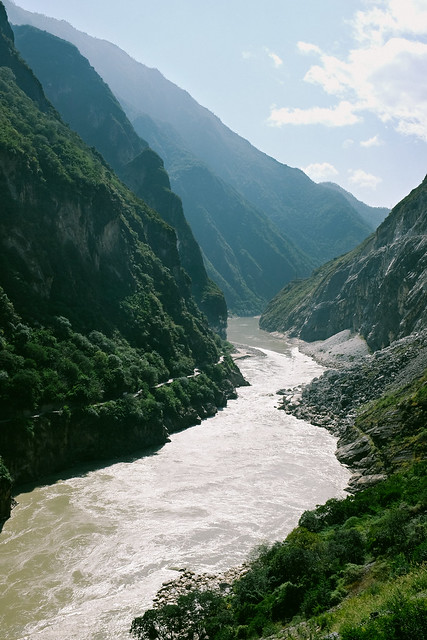 We came to Tiger Leaping Gorge after Lijiang, which is only about 60km away. Lucky for us, we did not come here only to stop at the tourist vantage point but we actually planned a night's stay.

We first checked into our home stay, a lovely hut over-looking the gorges called 山白脸客栈 (Chateau de Woodie Guesthouse). One step to live up to the ideal of backpacking, we chose the RMB60 per bed dormitory. There were no other people in this off-season, we basically had the whole building to ourselves but at night it sure was a little creepy. Turning off lights means total darkness and starry sky!

Wasting not a minute more, we started the hike at the trail right beside our home stay. Hiking trails in Tiger Leaping Gorge proves to be very popular among the Westerners, with the local villagers even able to speak English while not necessary Mandarin!

The trail is called Middle Leaping Tiger, or 中虎跳. It seemed easy enough at first, with path laid out nicely by the local villagers. The sun was high and we even felt hot in this supposedly breezy place. 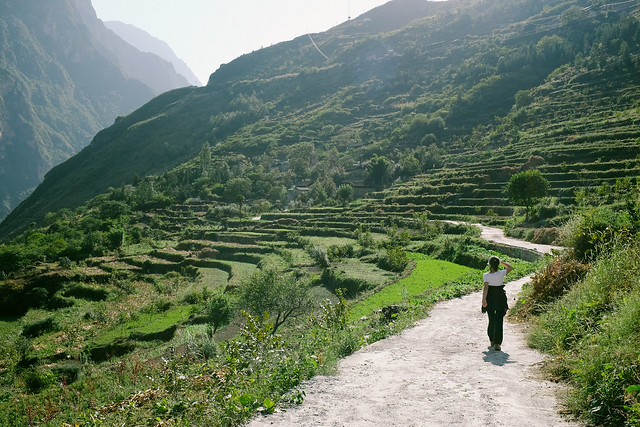 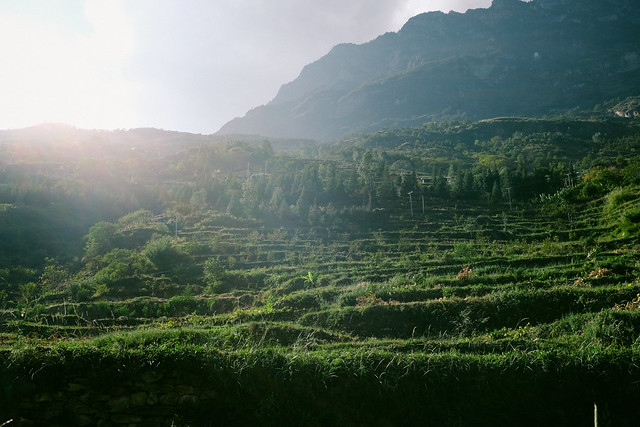 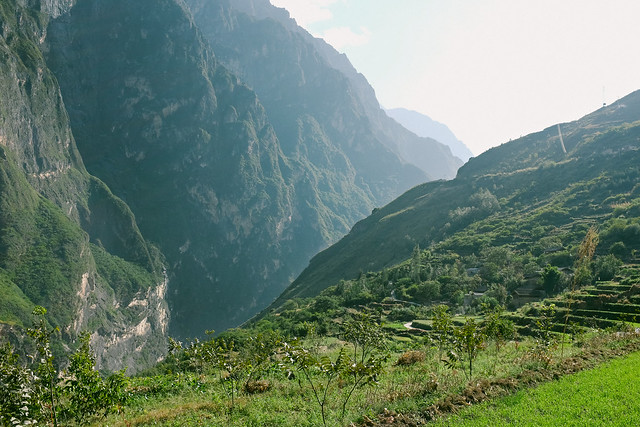 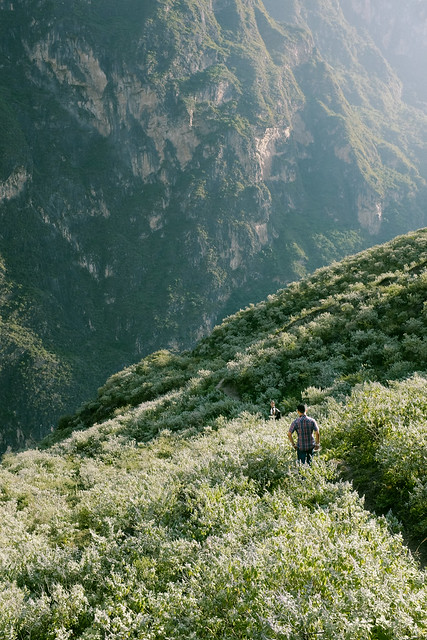 As we moved, our bodies heated up and we all felt warm and welcome the cooling breeze. 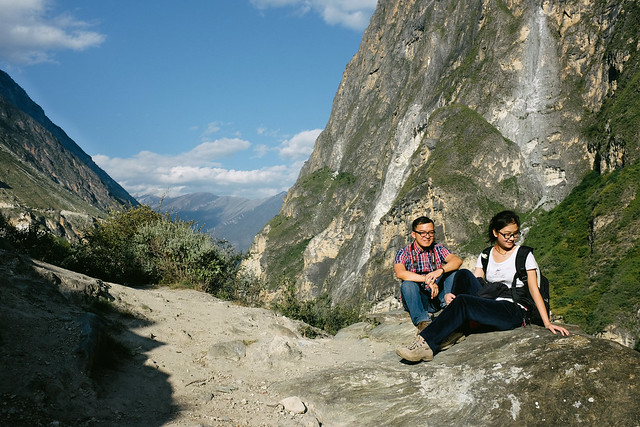 We came to the Tiger Leaping Stone after just a short hike, which is called 一线天 that means a straight line to heaven. There, we met a group of Guangdong hikers, that we joined dinner with later. 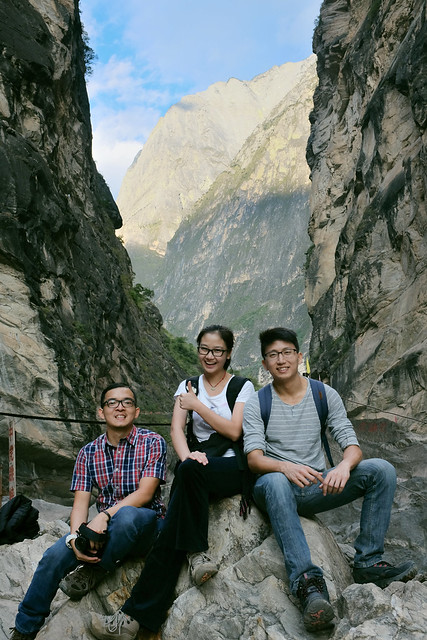 When it was time to go back, as it was getting late, we came to this ladder which is called 天梯 or sky ladder. It was very long but our quickest way to get to the top, so we decided to try. 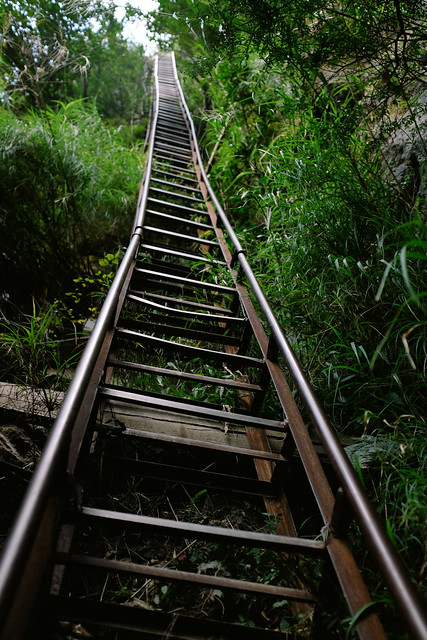 As the sun set, the surrounding temperature dropped and we felt cold. Gilbert caught a cold here most likely, as he started feeling unwell after got back to the hostel. We continued to climb and climb as the sky turned magenta and we finally reached the 天梯客栈 or Sky Ladder Home Stay, who built the freakishly long ladder. The group of Guangdong hikers were already resting there. 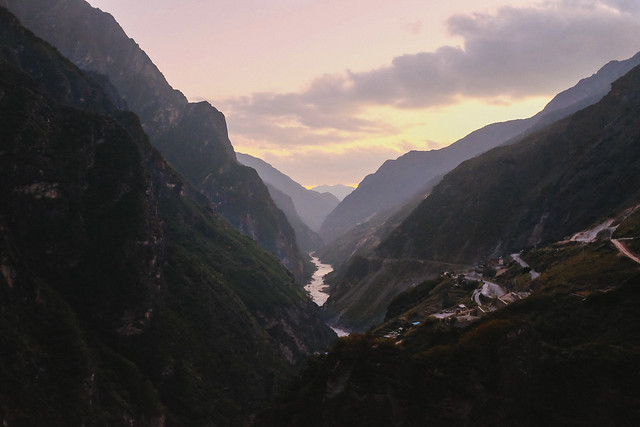 We were all starving and cold, and the friendly hikers invited us into the home stay for dinner and tea. They were even sharing the farm chicken they ordered. We sat together and exchanged talks with each other, indulged in the wonderful dinner. Finally, we had to bid farewell to each other as we had to go back to our own home stay which is some distance away. We got our home stay host worried as we were away for a long time. 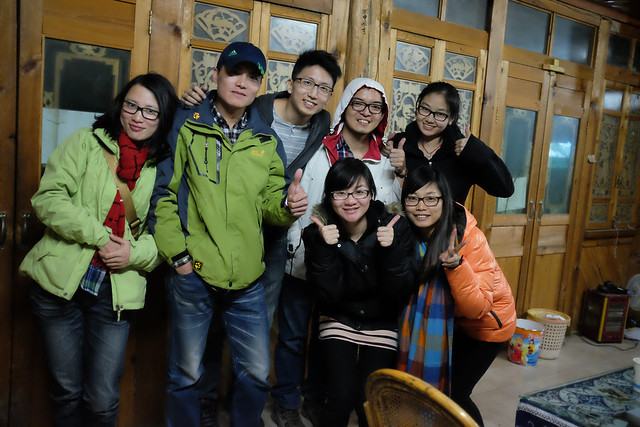 One thing I disliked about this place or the government of China, we were charged two times of toll by local villagers in this short stretch of trail. I understand that the villagers are actually the people that maintain this scenic place, and they were complaining that the government only imposed the national park entrance fee but did not do anything. The entrance fee itself was not cheap at all which felt like a rip-off of visitors, but that is the sad truth in everywhere of China.

Though, I wish we could have stayed here for one additional day as there are still so much to explore in this valley. 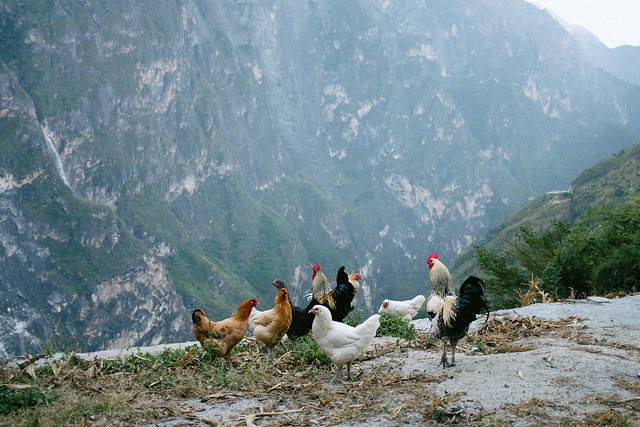